Tineli sponsored Team Seagate has won the opening round of the World Adventure Racing Series in the Tierra Viva race held in Patagonia, Argentina. (February 18th-25th)

The team of Sophie Hart, Nathan Faavae, Chris Forne and Trevor Voyce swept through the course to win by a significant margin. 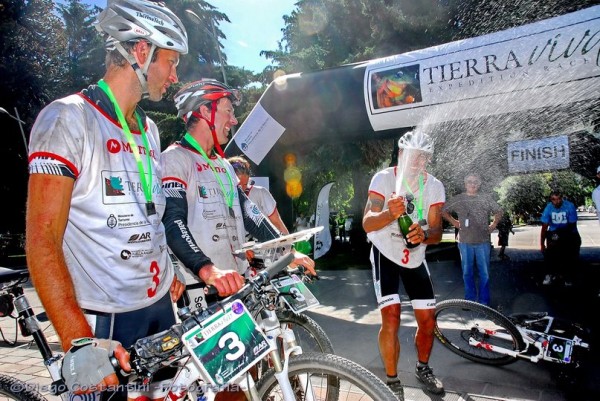 The race began with a 60km kayak stage on Lake Lolog, Seagate immediately went to the front and set a steady pace. Midway through the leg the wind increased and provided some good sailing conditions for the teams that had them, or downwind surf paddling for the teams without sails or kites.

By the end of they stage Seagate had a 40-minute lead over the second place team Zenith Deporcamping, with 2011 Tierra Viva winners Cristagua exiting the paddle stage in third place, both from Argentina.

The next stage was a bike / hike section that had a multitude of options. There were 3-bike sections and 2-hikes that could be done in any order teams chose. This meant strategy and planning was a major factor.

Seagate Team Captain Faavae says we opted to do the longer ride first, mainly to use a tail wind that was blowing at the time. We then did the bigger of the 2-hike stages, basically to get the hard stuff done early while we were fresh. A bonus of this was that it meant we did the volcano climb in daylight which was our race highlight I think.

Because of the options it was close to impossible for any teams to know where they were placed for almost a day. The 50km hike stage in the Laguna Verde included difficult navigation, thick forest and high mountains. Night temperatures dropped below freezing. Seagate emerged first from the stage but it was unclear what their advantage was.

They then biked to the 2nd trekking stage, two mountain climbs including an ascent of Volcano Aseret. 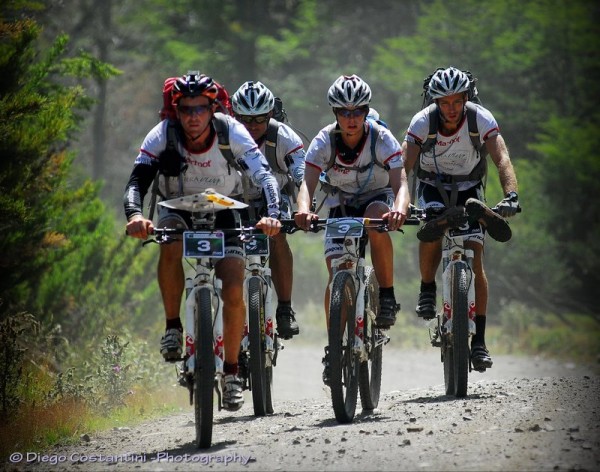 From there it was a 50km mountain bike stage to base camp. The team suffered 2-bike crashes on this stage when Forne lost balance on a narrow bridge crashing and damaging a front wheel. Later that night Voyce hit a corrugation while making an adjustment to his riding light, with a hand off the handle bars and crashed onto the road bringing down Hart and Faavae. He suffered mild concussion and the team were uncertain for the period if their race was over. Thankfully Hart is a doctor and was able to make a qualified decision on what needed to happen and what was possible. They rallied together and completed the stage and took some sleep.

After a 2-hour sleep Seagate opted to do the mountain bike stage first, departing at 2:00am. Team Zenith Deporcamping was in second place an estimated 5-hours behind.

After completing the stage Seagate took to the lake for the 40km kayak, ensuring the dark zone between 9:00pm to 6:00am would not impair their progress on course.

Coming off the water Seagate opted for another 2-hour sleep. Still unsure of their lead they quickly started the final stage, expected to take about 20-hours.

Faavae adds because we had very little idea of what stages other teams were on, or what order they were doing things in, we had to keep pushing all the time. It was actually quite a good situation as it forced us to be diligent. Had we known our true lead starting the final stage we probably would have taken more rest. Instead we only took a 40-minute nap in the field

The team reported the final stage was brutal, a cold night and an extremely hot day. The navigation was extremely difficult working from 1:100000 scale maps. There were very few trails or easy terrain to move on.

We raced really well as a team. Chris was on excellent form with the maps, the only time we got delayed was when a control was in the wrong place. Sophie is always fun to race with and is a good motivator, keeping things moving. Trevor did exceptionally for his debut expedition race, our pace through the difficult course provided some epic tests, especially carrying an injury after his bike stack. We made lots of good decisions I reckon, thats what ultimately won us the race by the margin we did Faavae says The event was professionally run with ultra friendly people. The scenery in parts of the course was amazing, I guess thats what Patagonia is famous for. Weve had a great trip, a solid race and overall a memorable experience.

Sophie Hart rated the Tierra Viva Race as one of her best adventure racing experiences The people at the race were super friendly and I think Patagonia was especially made for adventure racing, its a stunning place, I want to go back she stated.

The team are now focusing on recovery before they start their build up to the next round of Adventure Racing World series, The Godzone Race,  being held in Queenstown in early April.